While I was traipsing around in the northern Manitoba tundra (upcoming blog), the Society of Animal Artists had their opening weekend.
I am honored to have won the Ethology Award.
(OK, I have to admit I had no idea what this award was until I read the description.)
This Award is given to the "Best depiction of Natural Behavior in any medium." The animal has to be doing SOMETHING (as the show award description reads.)

According to Oxford:
ethology: noun
1. the science of animal behavior. 2. the study of human behavior from a biological perspective.
ORIGIN: Greek thologia, from thos 'nature, disposition.'

From the awards presented, best 2-D, best 3-D, President's Award, etc, I can't think of an award I would feel more honored winning.

And the winner is: Battle Royale 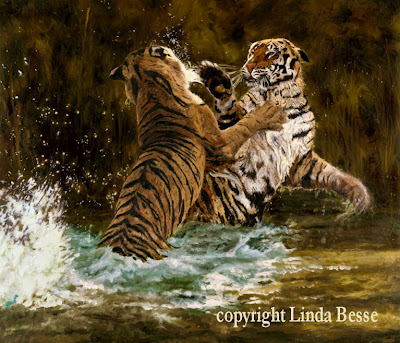 It just goes to show how ethical your treatment of animals is. :-) Congratulations!