For the trees and bushes I used the background of my photo shoot for inspiration. The bushes had a reddish tint which I magnified. Once the dogs are painted I'll know if some of the tree trunks need to be lightened for balance.

In the above photo you can see I've added more texture to grassy area. This will form the framework for my grass.

Here I have roughed in the grass. The upper area is cool with naples yellow, titanium white and blues. As I moved down the painting more yellow ochre was incorporated. Further grass details will be added after the dogs are painted.

At a show this February one of the attendees saw my painting Chukar Hunt and found that I do custom sporting dog commissions (in addition to other commissions.) It so happens that he has two German Shorthairs. In early March after the Natureworks show in Tulsa Oklahoma, I had the chance to swing by his house on my drive home and take my own reference photos in anticipation of a painting. Five hundred photos later, and time watching the dogs' movements in the field, I had what I needed.
Once I finished other painting commitments into early June, I created a mock-up idea and 3 other examples to present to the client to see if I was on the right track. I was, and after some minor modifications, it was time to start.

For this piece I am using a Jack Richeson Umber toned hardboard gesso panel. I found they make a 24" X 36" which was cut to 14" X 31" for this painting. After drawing on the panel, I decided to use a classical approach and do a tonal wash using turpentine and raw sienna. (For years I used this approach on a white gessoed board but this is my first time on a toned gesso board.)

Posted by Linda Besse at 6:52 PM No comments:

When I return from a reference gathering trip, my thoughts are often fixated on the wildlife I saw. Before I start on an upcoming commission, this piece begged to be painted. 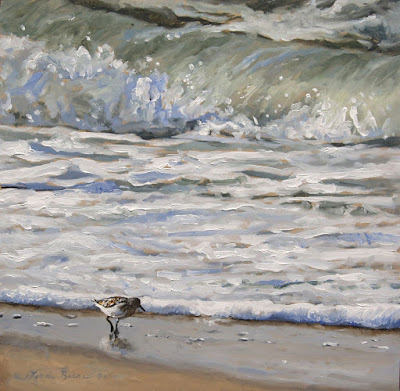 But this year I had a special treat. I was there at the perfect time to see mating horseshoe crabs. In a remote stretch of beach it was fascinating to watch this species older than dinosaurs. The females, about 1/3 larger than the males, would move toward the shallow water and attract numerous males. Some females had at least five males in attendance and she would bury herself in the sand beneath the water. Often the only way I would know she was there was her tail protruding above the sand.

As I child I remember seeing numerous horseshoe crabs during the summer but for decades since there have been so few. It was gratifying to see dozens in 60 yards of beach.
Here is one of my photos. 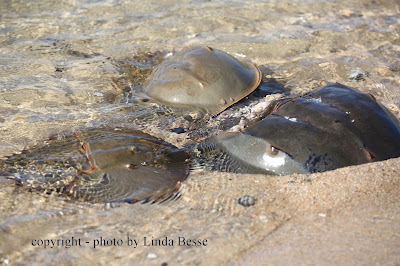