Setting Up a Show

﻿﻿﻿﻿﻿﻿I love what I do. That does not mean I love everything about the business of art and selling art.

January 23rd - 26th I exhibited and sold my work at Safari Club International in Reno. I saw many of my collectors and met new ones. That is the fun part.

It is getting ready for opening day which takes a lot a work. From packing up at home to setting up a 4-booth space (10' X 40' with 75 linear feet of wall space), the whole process can feel daunting. Fortunately, my husband is a master packer and with a show this big, he comes along to move and help me set-up the approximately 1200-1300 pounds of "stuff" (booth panels, carpet, easel, lights, lighting bars, tables, prints and racks, and all the paintings.)

Below are some of the steps taken to arrive at the finished result. 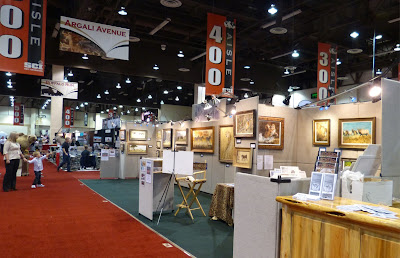 Another painting of paintings 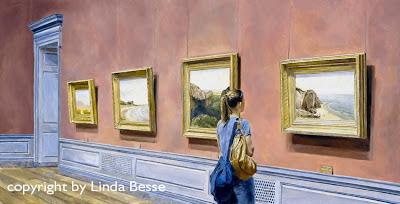 One of the things about deadlines is that sometimes you forget the little things  - like taking photos of the painting in progress. Sorry about that.

The first thing I painted since the last post were the gold frames. They aren't as easy as they look. Each one has different characteristics and since these are famous paintings, the frame that is on it needs to be painted. I can't substitue any old gold frame. Yellow ochre and Naples Yellow were my main colors but I also used some Cadmium Yellow Deep, Lemon Yellow, Titanium white (used for mixing the highlights), and Burnt Sienna + Raw Umber (for the shadows).

Once the frames were completed, I began with the left most painting and worked my way right. It is a little daunting painting landscapes from the 1800's ....and in perspective.

Lastly, I worked on the girl. Here, I felt like a director. What posture would convey the emotion I wanted to capture? How could I convey her thoughts to the viewer? I used the slung-over bags to give a "student" feel and hopefully a casualness. I'd like to think she was just walking along in the art museum and had to stop to look at this painting.

Now, some info for you on the paintings. If you haven't guessed yet, these paintings are considered from the Hudson River School. Using a pastoral approach to a landscape filled with light, this second generation of Hudson River school painters completed some of the finest examples of the genre between 1855 and 1875. Starting from left to right, below are details of the four paintings.
1) Siout, Egypt ( 1874) by Sanford Robinson Gifford, 1823-1880
2) Second Beach, Newport (1878-1880) by Thomas Worthington Whittredge, 1820-1910
3) The Last Valley - Paradise Rocks (1867-1868) by John LaFarge, 1835-1910 (note: LaFarge is sometimes considered an American Tonalist rather than from the Hudson River School but his early work puts him in step with other Hudson River School painters according to some authorities)
4) A Quiet Day near Manchester (1873) by Alfred Thompson Bricher, 1837-1908
Posted by Linda Besse at 2:00 AM No comments: 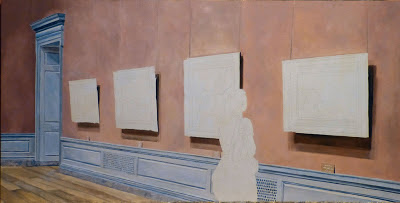 Sometimes deadlines mean you have to work late...or early. It is a balance. While I have worked through the night on paintings, I always stop when I feel I am too tired to give the painting my all. In this case, 1:45 am was my cut-off. There was no way I was going to attempt painting a masterpiece (not mine, the paintings in the painting) when I was not at 100%.
Posted by Linda Besse at 2:30 AM No comments:

Deadlines and artists are usually not close friends.

I happen to like deadlines. They give me a target and help organize my schedule. That does not mean I always make the easy choice in being prepared for them. Here is an example.

I recently realized that in preparing for a big show I had forgotten I wanted to paint a new piece for an upcoming auction submission. The "smart" decision would be to submit something I already had or paint a piece which would not take a lot of time or research. An idea spurred me to go looking through what I thought were some great bison reference I took this past summer in Yellowstone. They didn't excite me.

Hmm. I wanted to submit something special and so I went hunting through my reference to see what sparked an idea. This all started one evening at 9:30 pm.
After my show in Easton, Maryland this past November, I headed for a day at The National Gallery, Smithsonian. My idea was to gather reference for another painting of paintings like Art Appreciation (see post July 30, 2011) http://besseart.blogspot.com/2011_07_01_archive.html
What if I did something like that for the submission?


Yeah. Crazy. A deadline approaching and I'm going to paint several master paintings in a painting? But, I really wanted to and I was getting more excited by the minute. Next, research. I had the titles of the paintings but why were they hanging together? What connection did these artists have? Who should I add to "people" the piece? What size should I make the painting?

Inspiration is a funny thing. By 4:15 am, I had figured out my composition, done the research and prepared my board with two coats of gesso. Next was the drawing (a huge job which took several more days) and then I could start on painting the wall. I'll save which master paintings I am painting until a future post. 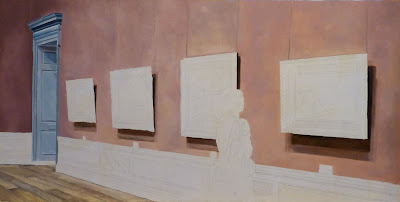 Stay tuned.
Posted by Linda Besse at 2:00 AM No comments: 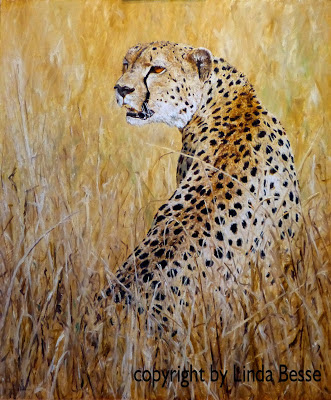 It has been a while since I have done a large cheetah painting. From certain angles, cheetah can look em﻿aciated, awkward, and not very "cat-like." But the curves that can be achieved with an over the shoulder composition really show off the beauty of this feline.
Posted by Linda Besse at 4:21 PM 2 comments:

I had a plan for today. After working out and breakfast, I was heading to my printer so he could scan one of my paintings and print my Winter art newsletter, From the Palette.
What I had not counted on was a foot of snow. The forecasted "chance of snow" was pretty thick. While I thought I could make it down my hill, I was dubious that my 4-wheel drive SUV could make it back up the 15% grade. The house power was fluctuating on and off and it seemed best to change my plans.

Besides, it is all so pretty and I have wonderful company.
﻿﻿
﻿﻿
Posted by Linda Besse at 1:36 PM No comments: 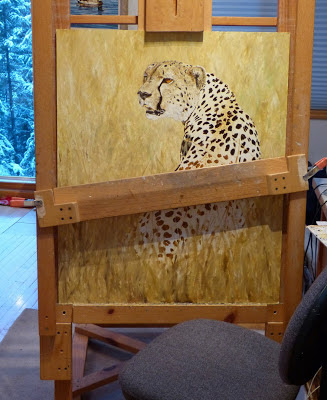 Seeing a big cat in the wild is always exciting. When I first saw this cheetah in the Masai Mara, I was in a hot air balloon  approximately 100 feet above him. What was particularly thrilling - he was chasing an impala and we watched him catch it!

At this stage in the painting, I have the loose distance background finished and his head mostly done. Some of his black spots on his back have been painted but none of the surrounding hair. His whiskers and the foreground grass I'll save for last.

I wanted to show you my easel. My husband built it for me and we discussed exactly what I needed and wanted. Most importantly, I needed a good hand rest for the center of my paintings. Not only is the oak hand rest ergonomic, it has great flexibility. I can move it into any position and I don't have to hold a mahl stick with one hand. On large oil paintings, it can take a while for the paint to dry and being able to work in the center of a wet painting is essential. In addition, I can move the painting side to side and up and down. For very large paintings, I can remove the side verticals for photos.
There are much fancier easels out there, but I would choose this easel every day.

Note: in the background of my studio you can see out the window. We still have lots of snow.
Posted by Linda Besse at 10:34 PM 1 comment: