Rather than painting caribou in the Boreal Forest, I have decided to make them zebra. Just need to add a few stripes here and there......only kidding.
However, I have made some substantial changes to the painting since the last post.

First, for me the bigger bull's legs have been problematic. With two off the ground they didn't seem to convey the attitude I wanted. He didn't look aggressive enough. So, for several days I tried various combinations of his back legs.  Now with only one leg off the ground the bull has more heft.

Secondly, the bulls' heads were getting lost in the trees. Before I painted anything this morning, I went into my Paint Shop Pro program and digitally painted in more water to see how I liked it. Yes, it was working. Then I e-mailed an image of the current state of the painting and the "more water" mock-up to two close friends to obtain their opinions. Both agreed the mock-up was more effective. Thank you Selena and Lee.

Next was paint mixing and goodbye to some of the forest. Don't worry, I don't think the removal of this small section of trees will drastically alter the oxygen contribution to the earth's atmosphere.
There are still some more details on the large bull caribou I want to touch but I will wait until after the foreground has some color.

First a quick note on the smaller bull. I saw him the same day as the background caribou on the right and left. First thing in the morning, he and a cow swam across Lake Kamistastin, Labrador and up the bank to walk right in front of us just after we left camp. Little did we know that hours later we'd run into dozens barrelling past us in a spruce forest.

Now for a note on artistic license. One isn't much of an artist if one just copies a photo exactly. A common use of artistic license is to make the males look bigger, especially the antlers in the deer family. I have seen some magnificent paintings, only to be distracted by an impossible rack.

I'm going to come clean on this big bull. I actually saw him! Three of us were on the far shore from camp. We had just finished our pack lunches and spotted a group of caribou on the ridge above us. Up we climb and there is a wonderful bull. Hiding behind a rock, the only sound is the rapid fire of our camera shutters and the occasional, "oh, this is so great!"

Just then, out steps a monster bull. The bull we had been so excited watching paled in comparison. This big bull was a magnificent creature. We only snagged a few reference photos before he disappeared back over the ridge and we never saw him again.
﻿﻿﻿﻿

There was only one problem. Could we ever paint him? Would anyone believe he actually existed or would they assume we had gone wild with artistic license? That was October of 2008 and I have waited for just the right occasion to paint him. This Conservation Artist of the Year painting seemed the perfect opportunity.
﻿
﻿﻿﻿﻿﻿﻿﻿﻿﻿

Time for the Bulls 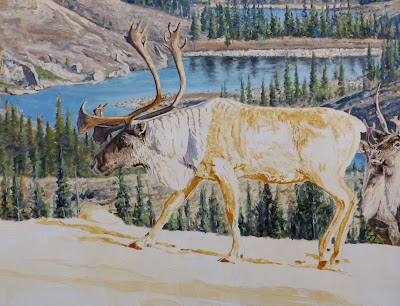 I'm just getting started on the smaller bull. First I began with his antlers then moved to his head. Now that I have much of the shadow in on his mane (the white fringe) I will wait to paint the "white" part until after I have some more of his body done. Why wait? Well, I like how adding the lightest light at the end of painting an animal brings everything together.

One of the challenges for a piece like this is to make the caribou stand out from the background without making them look pasted on. Some of that is done with some softer edges and some of that is accomplished with the color palette. The bulls will have warmer colors and more contrast, so will appear closer to the viewer.
Posted by Linda Besse at 3:00 AM No comments:

The three caribou on the left are from the same encounter as the group on the far right. The story is on my previous post.
I used some artistic license for the left group. The furthest left one was with another group but I moved him here because I liked his position for the composition of the piece. He brings the center of action back to the two big bulls.
The caribou on the right of the left group had its rump in shadow from another caribou. Originally I had drawn that other caribou in back of the bigger bull but decided to eliminate him so the focus could be more fully on the big bull.
Next up, the smaller of the two bulls.

Posted by Linda Besse at 7:57 PM No comments:

Now for the Caribou 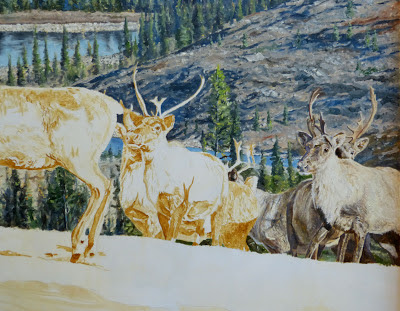 The caribou in this painting are ones I saw on three separate occasions on my WREAF trip to Labrador in 2008. The group I am working on now and the three on the far left side of the piece are from one very exciting day. 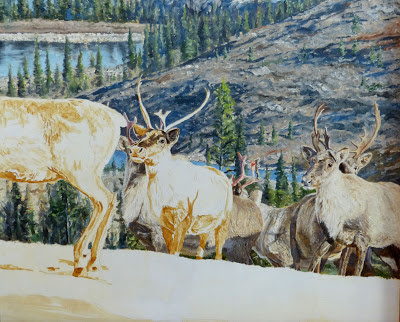 We were eight artists flown into a remote section of Labrador on Lake Kamistastin the end of September. I spent most of my time with two of the artists, Cole Johnson and Steve Oliver.

Early one morning, Cole and I headed off to the back country to find caribou, prepared for a long day of hiking. About 5 or 6 hours into our strenuous hike in quite hilly terrain I spotted several dozen caribou on a ridge to our right. Cole devised our plan. We were on a ridge overlooking a bowl which had a spruce forest. He thought once the caribou started moving down their ridge if we went down ours and positioned ourselves in the forest, we would be in a perfect spot to grab photos as they moved past us.

The caribou starting moving down their slope...fast. We ran down ours and entered the forest trying to move as fast as we could so we would be in place when they arrived. It wasn't long before Cole and I were separated. (Cole and I had made a plan to meet back at the ridge in case we were separated. Always good to have a back-up plan in remote country.)


Not wanting to yell to find where he was, I just kept moving, stopping every now and then to listen for hooves.

Nothing. Had the caribou gone past? stopped? turned in another direction? I kept moving, hurriedly but quietly, stopping every few minutes to listen. How much time had past? I had to take a peak to see if I could spot the caribou. There was a small slope to my right and I got down and crawled up to take a glance. Inching up I just reached the crest when the brush exploded to my left. The caribou! They were streaming past me.

Caribou are not huge animals but they sure seem fairly big when you are flat on your stomach and they are moving right next to you. They are curious creatures and would often stop and look at this idiot in camouflage on the ground who whipped out her camera to photograph them. Cows, calves, young bulls, but no huge bulls.

Wave after wave passed me and then more sound in the brush and a large bull almost ran over me before moving by on my right side. Now they were running past me on both sides. What a thrill!

It was over before I knew it. Now, where was Cole? Did he see any of it? I chanced a quiet call out for him and to my surprise he answered right away. He was just below my little mound behind some trees and had seen the whole herd. We were giddy as we told each other our encounters and shared our digital photos.

By the time we arrived back at camp it was dark. We'd been gone 11 hours and were beat. But, not too tired that we didn't want to share the excitement of being in the midst of a herd of migrating caribou.

Below is one of my photos from the encounter. 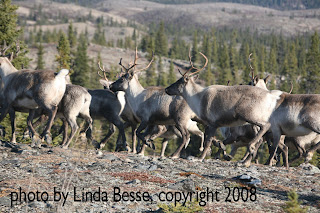 Posted by Linda Besse at 4:00 AM No comments:

In a break from the caribou painting,

I am thrilled to announce that my painting Easter Parade has been accepted into the prestigious Birds in Art exhibition at the Leigh Yawkey Woodson Museum in Wausau, Wisconsin.
From 974 entries submitted by artists from around the world, it was one of 95 paintings and sculptures accepted.

I am looking forward to the "Birdy" weekend in Wausau in September. Of particular note, the very talented graphite artist Terry Miller will be honored as this year's Master Artist. An honor so well-deserved.

Easter Parade is my 9th painting to be accepted in the last 12 years.
Posted by Linda Besse at 10:06 AM No comments:

I was talking with one of my artist friends yesterday and she said she starts her paintings with the subject first because it is the most fun.
That is precisely why I start with the background first. Finding the animals the most fun to paint I want to save them for later in the painting. Especially on a large piece like this my enthusiasm grows as I near the time to work on the caribou.

There will still be adjustments to the background and the whole foreground to paint once I finish the caribou, but now I can move into my element and start my caribou stand off. My plan is to paint the right group first, then the left group. Next I'll paint the smaller bull and finally the larger bull.
Posted by Linda Besse at 4:06 PM No comments: