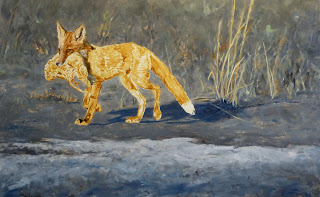 Now that I have started on the fox, the piece is coming into better focus for me. I have darkened the blue shadow and I think it will contrast nicely with the orange of the fox. The grasses on the right side help balance his movement to the left.
There is still much left to do but I think the painting is moving out of the icky stage.﻿
Posted by Linda Besse at 4:00 AM 1 comment: 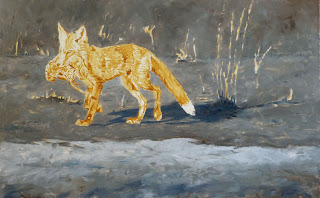 For a couple days I found lots of excuses not to paint. That is because I didn't want to go through this stage. The icky stage, the I'm not sure where this is going stage, the what do I do next stage.

I can see the cool shadow is going to work. As for the rest, I need to be patient and stick with the plan.
Posted by Linda Besse at 4:00 AM No comments: 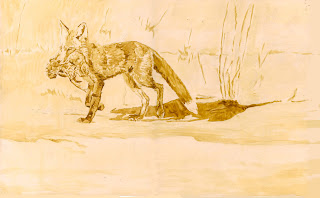 In one of our early camps near the headwaters of the Noatak River I had a wonderful encounter with an unexpected visitor. Five of us were gathered in the cook tent and thinking about starting dinner. The light was so glorious that I stepped out to get a few photos of the surrounding hills.
Out of the corner of my eye, I saw movement. To my great surprise, it was a fox walking toward me carrying something in his mouth! My camera was set for the light and while I shot as many photos as I could, I whispered back to the cook tent as loud as I dared, "Fox! fox!" The fox walked past me and when the others peered out, leapt into the willows behind camp.
It wasn't until I was reviewing my photos days later that I realized the fox had two sik-siks in his mouth. (A sik-sik is an arctic ground squirrel.) He and his family were going to have a feast that night!

Like most of my paintings, I start with an untempered board which I gesso myself (back, edges, and two coats on the front.) I draw the rough outlines and then do a turpentine wash with a little raw sienna and burnt sienna. From this I have a bit of a value study.
I decided to take a risk with the composition. A more typical layout would have the fox on the right side of the piece walking left. Conventional thinking would say placing the fox on the left side walking left will lead the viewer's eye out of the painting. It is that shadow under and behind him which I think will balance the composition. If it is a deep blue-purple it will also make a nice contrast to the orange fox. In the end I think this unusual composition will add more movement to the piece.
Posted by Linda Besse at 4:30 AM No comments: 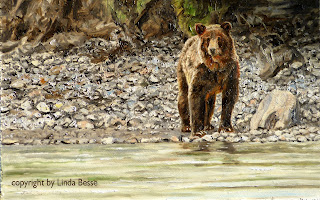 During our Noatak River trip we saw 14 or 15 grizzlies. My close encounter will be a story I tell for a long time. It wasn't long into our adventure that every place we stopped had bear tracks. The question was .....how fresh???
This was a younger bear who watched us pass before ducking into the brush.

Sometimes I use a heavier hand when painting and give the piece lots of texture. This is one of those paintings. Rugged bear, ﻿lots of paint.
Posted by Linda Besse at 7:25 PM No comments:

With seeing a musk ox in the wild being my top wildlife goal for my recent Noatak River trip above the Arctic Circle, it seems fitting the first piece I complete from the trip features musk ox.

Our Expedition Leader Rob Mullen was painting away from camp when he kept hearing a loud clunking sound. When he went to investigate, he saw two musk ox "at odds." He immediately alerted the other five of us and we scrambled to grab our cameras and witness a dominance battle which has played since the Ice Age.

The setting had grasses and was brighter but I thought to instill the mood, I needed to "move" the musk ox to a tundra scene I saw nine days earlier.﻿ As for the Study, this oil painting is a concept piece. I'd like to do a larger work featuring two musk ox battling and working on this study gives me a chance to try out some ideas.
Posted by Linda Besse at 4:23 PM No comments:

Home from the Arctic 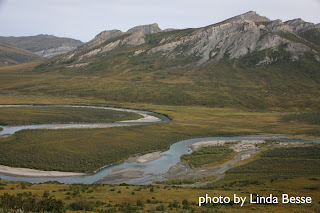 I have returned from above the Arctic Circle. With our accurate GPS accounting (thanks to Expedition leader and artist Rob Mullen), the six of us completed 458.6 miles of paddling on the Noatak River. We were 3 men and 3 women and the trip was self-supporting with no resupply. Above you can see the Noatak River in the upper zone near its headwaters.

What an amazing trip. I have so many stories it is hard to know where to begin. One of my hopes was to see a muskox in the wild. I was handsomely rewarded numerous times. Maybe the best way to tell my stories is through the oil paintings which will be inspired by this WREAF trip (Wilderness River Expedition Art Foundation founded by Rob Mullen.)