Today is Earth Day and I thought I would share photos from my house at 8 am! Some would wake up discouraged at 6:30 to see a blanket of white outside. Me, I know we are headed for a new record. The latest a 60 degree day has been recorded in Spokane since the beginning of a year was in 1917 when the temperature didn't reach 60 until April 22nd. Seems unlikely it will reach 60 today.

With this being Holy Week, Earth Day can get lost. But looking outside and seeing the beauty of maybe our last snow of the season, one can't help but feel the magnificence of, as the book of Common Prayer says, This fragile Earth, our island home.
﻿
﻿﻿﻿
﻿﻿
Posted by Linda Besse at 9:14 AM 1 comment: 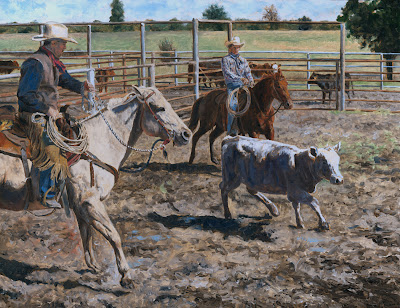 Learning the Ropes
14" X 18"
Original Oil
Here is another western piece I am bringing with me to the San Dimas Western show opening April 29th. What I found interesting about creating this piece is the fun contrast between the abstract muddy ground and the detail of the near horse, ropes, and chaps. I have some tight and loose painting in Branding Day (see earlier blog), but I exaggerated the difference in paint treatment in this piece. Pushing the color in the shadowed side of the calf to include some rich purples led to some interesting color mixing.

Someone recently asked me what medium I use. I don't use a medium. The Rembrandt oil paints I use are buttery enough to move really nicely when applied to my gessoed board. Also the lack of medium keeps the colors vibrant.
Posted by Linda Besse at 8:11 PM 1 comment:

Can you hear me now? 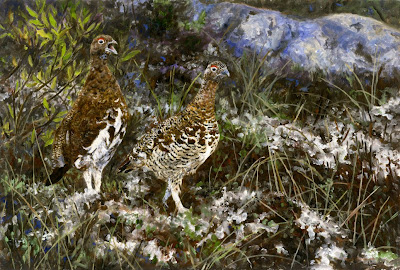 Tundra Call
15.5" X 23"
Original Oil
Along the deserted Denali Highway in Alaska, we spotted a large flock of ptarmigan. Trying to gently sneak up on them for a few closer shots without disturbing them, I turned around to see one adult had run up to me and started squawking! I do believe the little ones hadn't encountered humans. Watching the flock was so much fun and their feathers were just beginning to turn white for winter.

I have wanted to paint this piece for a couple years and it has been in progress for over a year. At many of my shows, I paint. I bring a piece in progress in a specially made box for the wet painting. It has a 1/4" lip and can hold a painting up to 16" X 23". One dimension has to be either 16 or 23 to rest on the lip. For travel, the painting is placed in upside down.

For my March show in Tulsa in 2010 (yes, more than a year ago), I brought along the painting with only the heads of the two ptarmigan painted. And, I forgot my reference. Any other time, no problem. I could at least work on some of it. But, since this was my first time painting ptarmigan, I really needed my reference photos for all the feather detail. So I didn't paint. The painting went back into the painting box. It wasn't until January and I was trying to figure out what I would bring to my show in Reno to paint when it occurred to me that I had this one started. It came with me and I completed the two birds and roughed in a tiny bit of the background during the show. Once home, I played with a little of the background, then put it back in its box for the trip to Tulsa this year.

Thanks to some really good background suggestions from Bruce Miller (a very talented artist at the show who graciously made a few comments), a day of painting once I returned home and the piece was done.

Maybe I should have titled it Can You Hear Me Now? since the painting has been trying to get my attention for so long!
Posted by Linda Besse at 2:52 PM No comments: 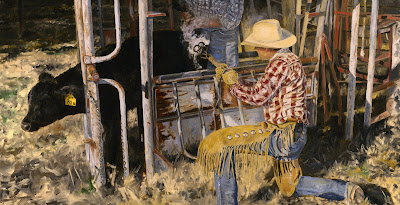 Branding Day
12" X 23"
Original Oil
There are times when it is important to use artistic license in a piece. My reference showed the branding cowboy had a checked shirt about the color of his hat. The checks were so faint they were almost impossible to see at a distance. I faithfully painted his shirt matching the subtlety of my reference.

My good friend Selena saw the piece in that stage. Fortunately. She said it looked like I hadn't finished painting the shirt. She was right. Now that I saw the piece through her eyes, the shirt needed color to pull off the illusion of depth. My next quandry: do I make it blue checks? red checks? introduce green? In the end, you can see I chose red checks.

So I have dipped my toe into Western art thanks to Terry Miller and his cow and horse pieces and my upcoming San Dimas Western Show. There are a few things I have learned from this painting (which is a goal for almost every piece I do.)

And reinforced:
1) Unfamiliar subjects will take more time to paint as I explore new edges (and often colors.)
2) Having another set of eyes to give me a fresh perspective is invaluable (especially when exploring new ideas.)
3) Trying new subject matter is a great way to learn. 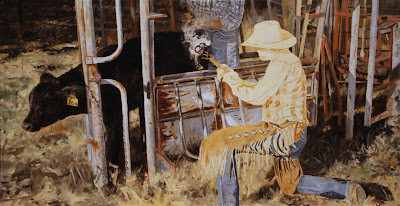 I find rust tricky to paint. Maybe because I don't paint it very often. (I have painted some really old elephants, but they weren't rusty.)

For the dark rust in the shadow, I found Burnt Sienna with a touch of VanDyke Brown or Raw Umber worked well. For the lighter orange I used a combination including Cad. Orange, Burnt Sienna, Yellow Ochre, and Titanium White.


The non-rusty sections in shadow are a clean blue (Titanium White, Cerulean Blue, and Ultramarine Blue.)
Since I don't wash my brush in turpentine before switching colors, often I have remnants of other colors on my brush. Many times I will do a large section of a painting with just 2 or 3 brushes. This helps the colors appear more unified with many colors having bits of others in them. If I paint a dark area and move to a lighter area, I will wipe off as much paint as I can with a paper towel so it doesn't get too muddy. For areas that need to be drastically lighter, I will splurge and grab a clean brush. 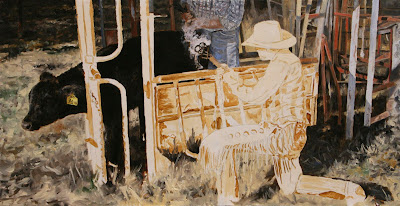 One plaid shirt and pair of jeans down, one to go.
Posted by Linda Besse at 9:24 PM No comments: 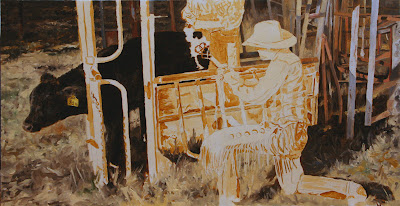 The rule of thumb for most paintings is to simplify. Edit, take out everything you can to make a dynamic piece. I could have reduced the number of corral posts on the right of the painting. But, having this mass of bars seems to push my eye away from the confusion of posts to the main action. The branding. It is the most simple part of the painting with the highest contrast.
Posted by Linda Besse at 3:36 PM 2 comments: