It had been a trying morning. I had been on hold for two different issues for a long time. On one of them, each time I reached a representative I was told she couldn't hear me and the person hung up. I eventually found out the company was having phone issues.

This is not how I planned to spend my morning. With one issue handled successfully, just before 11 am on October 27 I headed downstairs and walked in to the kitchen preparing to make myself a cup of tea. I stopped dead in my tracks. Outside the kitchen window, right in the yard, was a cow moose!

It has been more than a decade since we have had a moose (which we have seen) on our property. My camera in hand, I quietly approached the window and found another surprise - a moose calf. 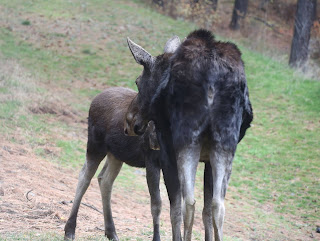 From inside (so not to disturb them) I watched as they moved around the house. The calf smelled a lot of my plants (which he could have easily uprooted and destroyed) but he opted to snack on the remaining leaves of our columnar cherry tree. 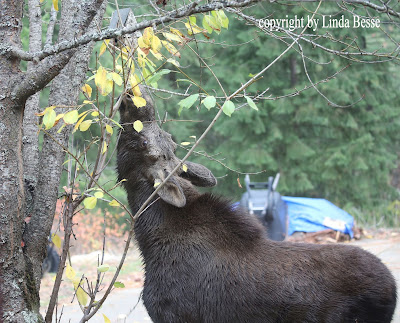 Mom kept an eye on her calf and strolled over to see if there were any remaining goodies on the apple tree. After they had their fill, they slowly meandered down the hill. 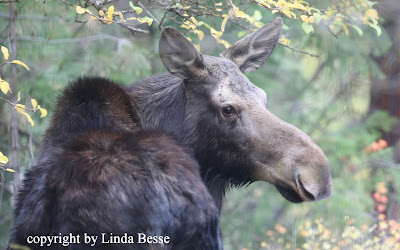 After a very dry and hot summer, she looked surprisingly fit and had a full healthy coat filling in for winter.

I wonder. If I had not had a frustrating couple of hours first thing in the morning, would I have missed seeing this pair? 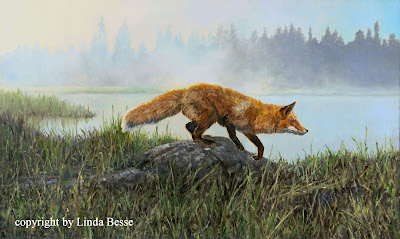 Some of the colors in the above image of the painting may look different than in previous posts. The above is a scan of the completed painting.

Morning on the Marsh will be going to the Waterfowl Festival in Easton, Maryland. Come join the fun, great art, sporting dog demonstrations, and partake in some of the best food the east coast has to offer.

My work and I will be at the Armory location.

Posted by Linda Besse at 5:07 PM No comments:

More - On the Marsh 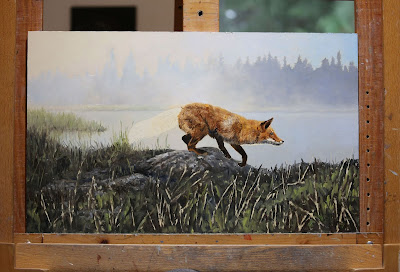 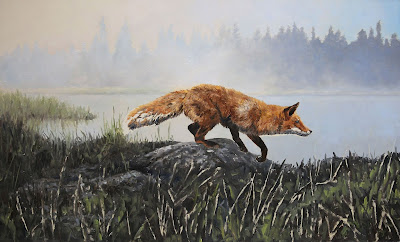 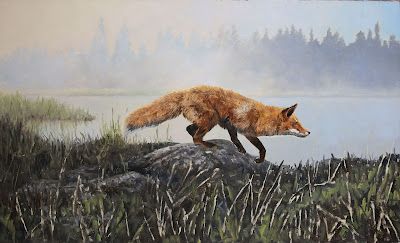 Posted by Linda Besse at 8:32 AM No comments:

Unless you have a particularly vulnerable chicken coop, you are probably a fan of the red fox.

There is a wildness yet adaptability in this stunning species. 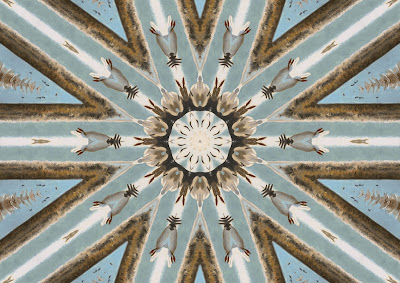 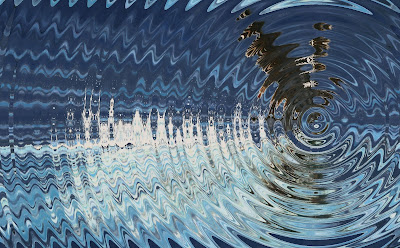 No, I have not become an abstract painter. Let me explain.

The 50th anniversary of the Waterfowl Festival in Easton, Maryland is less than a month away.

I'm excited to be going and sell my oil paintings in the Armory location. Over the next several weeks I'll be sharing some of the new paintings I have completed for the show. (For instance, the previous post with Crab Dinner will be there.)

However, to leave some surprises, I won't be showing you everything. Two original oil paintings which will be there are above - but they are disguised. For the top image I used a kaleidoscope tool and for the lower one a ripple tool was applied.

Can you guess what they are?

On November 12, my blog post will reveal the paintings.

In the meantime, check out all the Waterfowl Festival has to offer. I'd love to see you there! 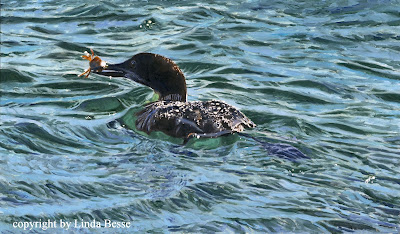 While this water took longer to paint than I thought it would, I think it helps in telling the story.

And this is a sight I did not expect to see. Next time I will be less surprised watching a loon taking advantage of a tasty morsel found in salt water.

Posted by Linda Besse at 1:37 PM No comments: