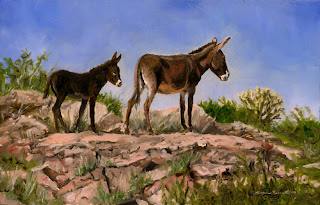 Just outside Las Vegas, Nevada is Red Rock Canyon National Conservation Area. There are wild horses and wild burros which roam the Conservation Area and the surrounding hills. Since I only had a couple hours one afternoon, I didn't expect to see either. Fortunately, near there I ran across 1/2 dozen wild burros including this little guy. I thought these two would make good subjects for a little piece.

Now to the Tundra 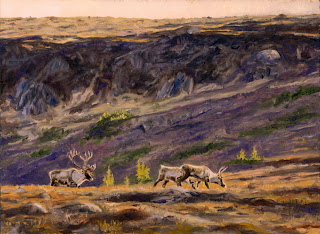 On one of the last outings during my trip to Labrador, we came across this beautiful bull caribou. It was late in the afternoon and we paused to watch him and his companions before we hiked down the steep slope to Lake Kamistastin. Our climb had been rewarded. 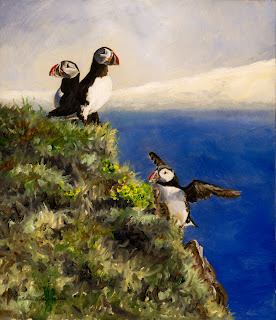 West Fjords
Original Oil
7" x 6"
From Africa in my last piece, I move to Iceland. Many who have visited this stunning island have only seen Reykjavik or at the most taken the Circle Road. It was our out-of-the-way trip to the West Fjords which made the greatest impression on me.
At Latrabjarg, you can stand on a 1000 foot cliff edge which stretches14 km and see over 100,000 birds at a glance. There were only four of us in this remote place despite the fact you can drive there.﻿ Millions of birds nest here and it has the world's largest colony of razorbills. Fortunately, we were there on a brilliantly sunny day and the puffins were choosing their nesting areas in the grassy mounds at the cliff edge.
Posted by Linda Besse at 5:49 AM No comments:

Starting off the Small Paintings 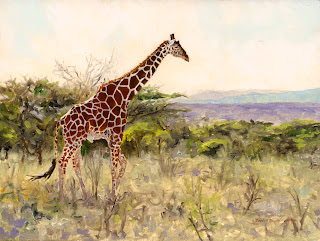 ﻿﻿Walking Tall
Original Oil
6" X 8"
I thought this would be a good subject for the start of my small painting group.
While in Samburu, Kenya, I saw Reticulated Giraffe, the largest and I think most impressive of the giraffe sub-species.
(And yes, I did use some small brushes on this painting!)﻿
Posted by Linda Besse at 8:22 PM No comments:

As I was thinking about my upcoming Fall shows, I realized I was shy on small paintings. Rather than do what I usually do (think about an idea, explore it, then paint it), I decided I wanted 10 ideas! Reviewing a range of possible painting ideas at the same time would enable me to choose a group to maximize my collectors' selection.

Where to begin. I knew I wanted some African, some other far flung locations, and a good number of North American subjects including water pieces. First I started with the digital photos I have taken. I use a program called iView Media Pro which enables me to view the metafiles with great speed.
(Note: I had no idea what metafiles were and why I wanted them until I started researching for a photo management program. Suffice to say they are reduced files designed for rapid viewing which do not change the original file.)

I believe I looked at slightly over 40,000 of my digital photos. Also, I fingered through the prints which I have referenced and cross-referenced. Since I knew what print references I wanted, I didn't have to look at all 22,000+ prints.

What was I looking for? An interesting subject, good lighting, an inherent story and something which would read well at a small size. Two ideas I decided to make a little bigger with the larger of the two 12" X 16".  In the end I came up with 13 ideas and drew 12 of them starting at 6" X 7".  Also, along the way I saw some images which sparked ideas for larger pieces.

I plan to work on them one at a time and will share them in upcoming blogs.
Posted by Linda Besse at 5:31 PM No comments: 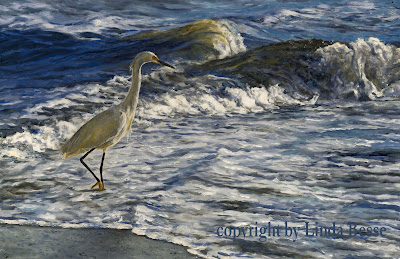 
The middle of May I had a wonderful outing with two of my artist friends, Gary Johnson and Lee Kromschroeder. They thought it would be fun to head to Torrey Pines State National Reserve, a wild stretch of scenic coast just north of San Diego. Never having been, I didn't know what to expect. We climbed the hill and walked among the Torrey Pines, a very interesting and unfortunately now rare conifer.
From the top we watched "squadrons" of brown pelicans fly the cliff edge just above our heads. A winding path lead us down the cliffs to the beach. Within minutes, we spotted a snowy egret moving in and out of the surf zone catching small minnows and snails. The lighting was gorgeous. It wasn't long before the snowy egret had the company of another egret, a great blue heron, and a long-billed curlew. Add to that the pair of peregrine falcons and it was quite the afternoon!
Three artists and one snowy egret. How would each of us paint it? Would we see the same things? What if we each did three paintings of the bird. One no bigger than 6" X 9", another approximately 9" X 12", and the third larger, whatever size we chose. It might be interesting to show all 9 paintings together. I love to paint water so I was eager for the challenge.
Well gentlemen, here is my first painting. Where are yours???