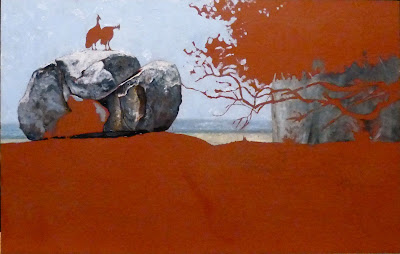 With a Master of Science degree in geology, I found the kopjes of the Serengeti particularly fascinating. Formed over 550 million years ago, they are the remnants of a harder granitic plume which cooled underneath the softer sedimentary and metamorphic rocks which have since eroded away.
Kopje is pronounced "koppy" rhyming with poppy.
While they may hold a geologist's interest, they are an artist's dream. Large boulders rise above the grassy plains and are home to strangler fig trees, hyrax, klipspringers, and the big cats looking for a vantage point and some cool shade.
Posted by Linda Besse at 9:37 AM