As the name implies, these upland game birds were imported to the United States from Hungary. In the late 19th century this bird, also called the gray partridge, was released in Washington and California. It now is found in many states and also in Canada. 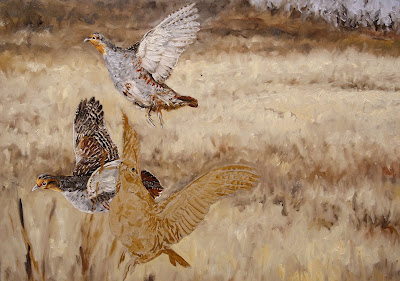 The patterns on the Hungarian partridge are stunning. To realistically depict them I reached for my small brushes and the magnifying glass! In the painting each bird is between 3 and 4 inches across.
Posted by Linda Besse at 8:41 PM