It was time. I have been thinking about this painting for quite a few years. While the subject matter would be important, it was the shape which drew me.
I wanted to paint a piece on a trapezoid-shaped gessoed board. To be more specific, I wanted the board to be an isosceles trapezoid.

The first was a practical consideration. Could my framer frame it? Could my husband cut the board the shape I wanted? When both said yes, it was time for designing. Whole number angles would be easier for both. Having the obtuse angle at 103.258 with the acute angle at 76.742 degrees would unnecessarily complicate the entire process.

For some reason, I always pictured the painting with zebra. Running through my thousands of recent zebra reference, I came up with quite a number of photos from which to build the painting. This was a fun idea, but the composition needed to be enhanced by the shape of painting. There had to be a reason why the piece was this shape.

Using a rearing zebra with its back line a different angle than the board seemed to make the whole concept more dynamic. I played with the composition and was able to work out the obtuse angle at 105 degrees with the acute angle at 75.

The painting is finished but if you'd like to see it in progress, the next few posts will show you how I painted it. Sorry, no photo of my framer pulling out her hair. She doesn't know yet that I think I want a double frame! 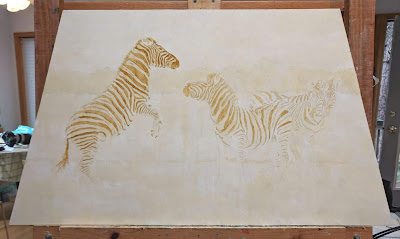