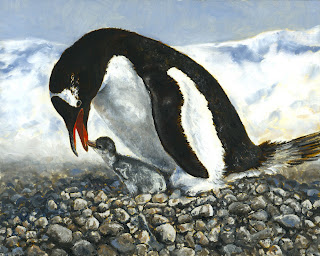 There are few scenes more touching than a penguin with its chick. I find the gentoo penguin with its red beak and white eyebrow one of most attractive of its species. Even at this young age, the chick is starting to show the tell-tale hint of a red beak. I wanted this to be one of the first scenes I painted on my return from Antarctica. 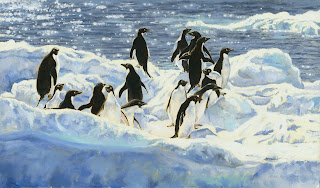 The first morning on shore, brilliant sunlight made the ice floes glow. I wanted to capture the nuances of the colors in the ice and the endearing character of the Adele penguins. The successful colony had tens of thousands of breeding pairs.
I like painting miniature paintings, and when finished with Penguin Party, I had to paint my signature. The last e of my name took 5 times to get right because it was so small. I had to wonder if maybe I had taken the concept of "miniature" a tad too far!
Posted by Linda Besse at 6:43 PM

Thanks for kind words on my recently completed horse piece, always nice to hear.

Turn around .... I LOVE your penguin works. How fortunate to have gotten such great reference on a wonderful trip. My penguins come from the zoo, but I guess any penguin in a storm!