From May to late August, some beaches on Martha's Vineyard are home to nesting terns. Common terns, least terns, roseate terns, and a few arctic terns return year after year to lay eggs and raise their chicks near the abundant ocean. Each year I enjoy my trips to see terns and other species nesting on the island.

While roseate terns are often mistaken for common terns, their more streamline body and long forked tail lend them a particularly graceful look while in flight. The summer grounds of roseate terns range from Long Island to Canada's northeast provinces with wintering grounds in northern South America. The European roseate tern spends its winters as far south as southern Africa. This tern species, like most, gets around.

As stay-at-home, safer-at-home, and limited openings remain in places throughout the world, a hopeful future seeped into my painting composition. I wanted to create joy in free-wheeling flight. 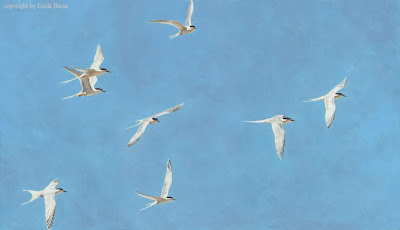