Other than the pigeon, the "sea"gull is probably one of the least popular birds. It doesn’t have the beautiful feathers of a goldfinch. It doesn’t have an alluring song, but seems to yell. It also eats the precious eggs of ducks.
But, a few years ago, I developed a soft spot for the Great Black-Backed gull. This gull is the largest in North America and nests along the East Coast. We were driving along a remote area on Martha’s Vineyard out past the Cape Pogue lighthouse, only accessible with 4WD. To our amazement, we found a breeding colony of Great Black-Backed gulls. This gull has little tolerance for other birds, but it will nest peacefully in colonies. I couldn't begin to count the nesting birds. While I had seen juvenile gulls, I had never seen a chick. Even the most hardened heart toward these aggressive birds will soften when its sees these adorable chicks.
A few weeks ago, I was back at Martha’s Vineyard. I made my way out onto the sand spit, always carefully watching for straying birds in the sand tire tracks. Not only did I see the chicks, but also oystercatchers, osprey, Herring gulls, and the endangered piping plover.
. 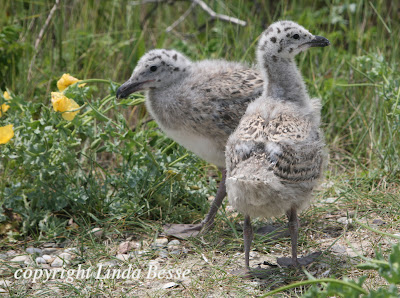