When I had a chance to see some original N. C. Wyeth paintings, the ones with backlighting especially drew my attention. It seemed the drama was intensified.

I came across this lion with his zebra on an early Namibian morning. Black-backed jackels were hanging around hoping for a morsel. The backlighting intrigued me and with dozens of reference photos, I had the start of an idea.

There were more than a dozen jackels in the area. The question was how many to include and in what positions to put them relative to the lion and to each other. I opted for three. They make a group but don't overwhelm the scene.

As for position, I thought an overall triangular composition would work. 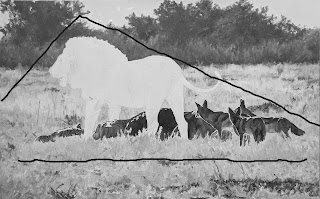 With photo reference, backlit objects can be underexposed, flat, and lacking in detail and color. As a wildlife artist I do use my photos for reference but that is just the beginning. Much of my painting will come from the time when I lowered the camera to study the colors, lighting, atmosphere, and interactions.

In this type of backlighting, I want the jackels to have substance but not a lot of fussy detail. 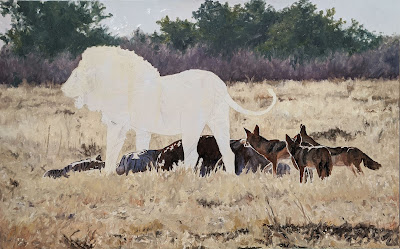 Next up, the lion and the highlights on the jackels and zebra.